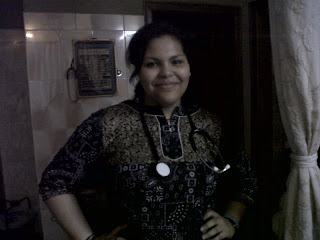 Today Marie Murphy (as seen above), one of our medical volunteers from New York, went to a charitable hospital called Sharma Charitable Center. She mostly took measurements of the patients' blood pressures, weights, heart rates, etc., but she also had the opportunity to go with the doctors on rounds and observe the doctors working in the outpatient department. In one particular case, she described a patient with a rash on his chest, resulting from heat and dehydration. The doctors prescribed a lotion and told him to drink copious amounts of water, as the summer is around the corner and the temperatures are not too extreme right now: he needs to prepare for how his body will react when the temperature will peak by the end of May. Most of the other cases were fairly common cases, including cold or flu symptoms, which she felt were not noteworthy, but the rash case was particularly interesting to an aspiring dermatologist.
Otherwise, the children in our orphanage have been doing very well in their classes! Earlier this month the children took their final exams for the year, and tomorrow they will be starting their new academic year in school. In India, the academic system works differently than how most volunteers describe their academic system runs in Western countries: Our new term begins in the end of March, and the school year ends in the beginning of March. Children have summer vacation off as well, but in the middle of their school year. Once the children finished this academic year, the results came in! Muskan, Rajat, and Anish, all performed at the top of their classes! Brij Mohan and Sonu also did very well in their classes, as Brij Mohan placed second and Sonu placed fourth out of all of their classmates. Unfortunately, it breaks my heart to see Manish struggling so much through his school work. This year Manish did poorly on his exams again, though the teachers have been seeing improvements! After our parent-teacher meetings, we all decided that he would stay back in lower kindergarten, and in three months' time we will reevaluate his progress. Sonu, Anish, and Brij Mohan moved on to upper kindergarten, while Rajat moved on to 1st grade and Muskan onto 5th grade. We will continue our hard work with all of the volunteering projects, especially educating the young children in our orphanage! Our results, for the most part, prove that we have been doing the best job possible!
Posted by Unknown at 11:07 PM