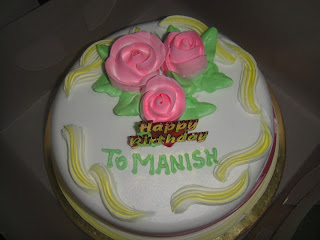 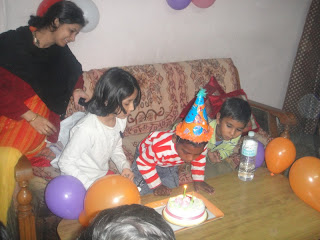 Two days ago was a very special day here in Delhi! It was Manish's fifth birthday, and perhaps his first birthday party ever! Two volunteers from the US bought him his birthday cake, balloons, the birthday present, and his birthday card to celebrate the occasion! On the evening of his birthday, my entire family, all of the children at the orphanage with the caretaker, three close family friends who frequently visit the orphanage, and four volunteers (one from Canada, one from Spain, and two from the US) all gathered for butterscotch cake and fun! The children loved playing with the balloons afterwards too, but made a mess on the floor! When the volunteers were getting ready to leave, they figured it would be best for the children to clean up the mess of popped balloons on the floor, so one volunteer, who had just learned the phrase "Saaf karo!" ("Clean up!" in Hindi), said the phrase for the first time, and she really impressed all of the children! At first the children, who did not see her say the phrase, all looked at her, dumbfounded, as if they were thinking "Did she really say that?" Then, she repeated the phrase, and in one minute, the entire home was clean! We were all amazed at the children's respect for our volunteers, especially the volunteers who come and spend much time with them! It was a very successful event, and we are looking forward to celebrating Rajat's birthday on January 31st!
In other news, two days ago, on Manish's birthday, it was also Delhi's annual Gay Pride Parade! The parade is usually held in the summer, but because of the excessive heat during this period, they shifted the date to the winter to expect more turnout at the event! Several volunteers expressed interest in going to the event, but decided in the end to stay in our region of Delhi to be with Manish on his important day! According to the papers, this was the most successful Gay Pride Parade in Delhi ever, with over a thousand participants! We are very happy to see that Delhi is becoming more and more welcoming of sexual minorities and equality for every person!
http://www.aimabroad.org
Posted by Unknown at 1:45 PM