Continuing with our discussion about using the English alphabet to represent the correct sounds in Hindi, I would like to go over the other vowel sounds, and some new important consonant sounds. In Hindi we find many different vowels, which are present in English, but the English vowel sounds are affected by the other letters in the words. For example, in English, we have a short "u" vowel with the sound in "book" ("buk," in this writing system) or "who" ("hu," in this system), which we will represent with the letter "u" in these Hindi lessons. This sound is not often come across in English, but we do find the longer "u" vowel more often, such as in "loom" ("luum") or "fool" ("fuul"), which we will represent as "uu" in this series of lessons. The difference is very subtle, and not extremely important, but it will help the Hindi student who has an interest in learning to properly speak the language. Basically, the short "u" is a shortened version of the longer "uu," which can be easily differentiated when we look at the difference in sounds between the words "book" and "loom."
Similarly, we have a short and long form of the vowel "i." Short forms are found in words like "pin" or "kin," while long forms are found in words like "clean" or "seen." To represent these vowel sounds, we will represent the short vowel form of "i" simply as "i." Thus, "pin" and "kin" are spelled exactly the same in both English, and this version of phonetic English. For the longer "i" sounds, we will use the symbol "ee," which is less strain on the eyes than seeing a word written with "ii" (for example, "deal" is easy to clearly represent as "deel" rather than "diil"). So, for "clean" or "seen," we represent these words as "kleen" and "seen" respectively.
Lastly, the last vowel sound to consider is the "o" sound. When we use the symbol "o," we are representing the sounds in words like "joke" or "most." For Hindi pronunciation sticklers, the sound is a little abrupt, in the sense that when we say "most," the first sound in the vowel is the sound we want, and the sound which almost sounds like the "uu" sound just as we pronounce the "s," this is a second, independent vowel, which should be omitted it in Hindi. In fact, the sound in "omit" is a much closer sound to what we want! Now, there is a final sound in Hindi which is similar to this "o" sound, which we will represent as "au," which, is its own vowel, and not two separate vowels, when you read through these lessons. This sound is uncommon, but found in words like "aural" or "drawer." This completes our discussion on using vowels!
We won't be able to finish up the consonants in this Hindi lesson, but I will introduce a very important discussion about pronouncing some of the most common consonants we come across in Hindi, and in the next lesson we can finish up these introductions to properly pronouncing Hindi words. Moving on, in Hindi, when we pronounce words such as "to" or "take," we do not pronounce them as "tuu" or "tek," but rather, as "Tuu" or "Tek" in this writing system. These capital letters differentiate between the t's, in which the tongue touches behind the interface of the top front teeth and gums ("t"), and the t's in which the tip of the tongue touches the palate ("T"), where the tongue touches the rear ridges in the roof of the mouth. This is very important to clarify, as in English, we do not use the tip of the tongue to make these sounds! We instead use a different region of the tongue, not the tip. In Hindi, we only use the tip of the tongue to make any sounds, and the rest of the tongue does not act in the articulation of refining sounds.
Similar to the "T" sound I have introduced, we also encounter "D," which is essentially is the same as "T," except the sound rolls as the tongue is still resting on the palate (similar in the comparison between "t" and "d"). In Hindi, we also have aspirated sounds, so we will also see the sounds "Th" and "Dh" appear, which should have clear pronunciation guidelines if you have been following these Hindi lessons. We also find a "n" sound, in which the "n" is produced by placing the tip of the tongue in the same place as when making the "T" sound, and we represent this as an "N." Similarly, we have a "S" sound, which nowadays has a sound equivalent to "sh," but in the older language the sound was produced by positioning the tip of the tongue near these hind ridges in the roof of the mouth, but not touching the roof of the mouth, and making a "sh" sounding utterance. This distinction between "S" and "sh" is commonly ignored nowadays, but I will remain true to the original and proper pronunciation of formal Hindi.
This wraps up today's lesson! We hope you enjoyed the lesson, as we feel it's necessary to cover the important tips about proper Hindi pronunciation for the avid learner!
http://www.aimabroad.org
Posted by Unknown at 2:25 PM No comments: 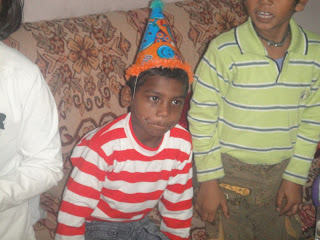 At Aim Abroad, we would like to wish everyone a very happy new year, or, "Naayee saal kee mubaarak baar!" ("Happy New Year" in Hindi), or simply "shubh kaamnaayein" ("congratulations" in Hindi)! At our projects in Delhi NCR, we have been quite busy during the holiday season! The children at the orphanage have had holidays from school, so we have been spending all of our time with the children, when they would normally have school hours. The children have also received their grades from school, and most of the children did extremely well! Muskan, the oldest child, came in first in her entire year in the school!  Brij Mohan and Rajat, two of the elder boys in the orphanage, also received the highest marks out of all of the children in their year! Anish did very well in his class, and Sonu received decent marks, however, Manish was not able to receive passing marks in school.
We were very sad about the news regarding Manish's results from school, as we have spent every day working with Manish and helping him; but the language barrier, since Hindi is a foreign language to this five year-old, is simply too large an obstacle for him at the moment. Though he has improved immensely, we truly struggle with his inability to communicate or understand Hindi that is not extremely basic, and we especially struggle with his attention and focus issues, in conjunction with his hyperactivity. We are really searching for any volunteers who have special experience working with children in his shoes, either incapable of complex communication, or with hyperactive and attention disorders. Though the news was difficult for us, we are doing our very best, and seeing the progress of the other children has motivated us that it is possible to help Manish, and he will one day reach a level of success, if we persevere! Attached, I included a photo of Manish on his birthday, just a few weeks ago!
http://www.aimabroad.org
Posted by Unknown at 8:26 PM 3 comments: