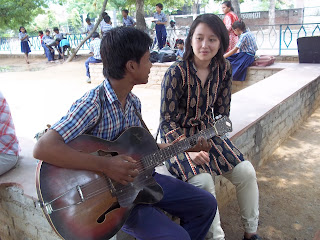 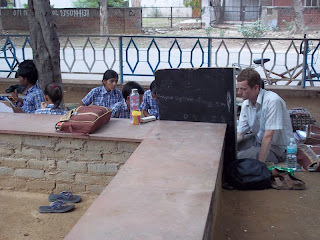 This weekend three volunteers, two from England and one from Spain, went to Delhi. In Delhi, they went to Connaught Place, the major shopping district, which the volunteers really enjoyed They stayed in Pahar Ganj, and visited Jamma Masjid and Red Fort as well. Four other volunteers, three from  the US and one from France, went to Jaipur, the Pink City in Rajasthan: they particularly enjoyed the Amber Fort and the observatory area in Jaipur.
This past week, the volunteers mostly worked with the street children program and the disabled children's school. At the street children school, the teachers organized a special day at the local park: Buses took the children to the park, where they could go on rides and play in the open area. Seven volunteers accompanied the children and the teachers to the park, and they all had a marvelous time with the children. The next day, the volunteers and the children had an assembly, where the children would ask the volunteers all different questions about life in their home countries and about any customs they practice. Some of the children even asked questions like "What is your favorite color" or "What do you eat for breakfast," but most of the children also asked interesting questions too. The volunteers also had a chance to ask the children anything they wanted, which really helped them learn more about Indian culture. The teachers helped interpret for the children who were unable to understand what they said, but the children, volunteers, and children all agreed that the experience was truly special.
Posted by Unknown at 12:20 PM No comments: 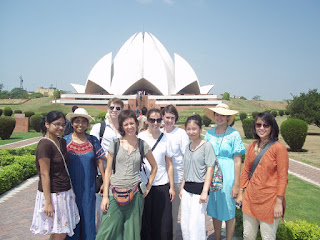 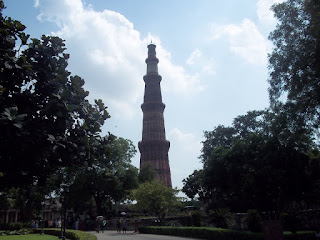 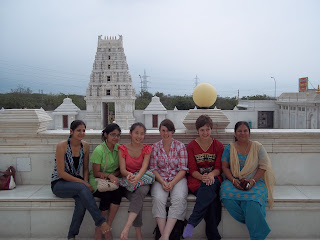 Today three volunteers with Aim Abroad, two from Spain and one from the US, went to Delhi to visit the Lotus Temple, Qutb Minar, Dilli Haat, Humayun's Tomb, India Gate, and Chhattarpur Temple before returning home to the host family in Delhi NCR. Some of the other volunteers will be going to the street children project, to sing, dance, and play with the children, and also to teach the children. The other volunteers will be facilitating a school for disabled children in the neighborhood as well. Last night, two of our volunteers from England arrived from a two-day trip to Jaipur, where they had a wonderful time. They described that they preferred Jaipur much more to Agra, as they felt as if they were in a metropolitan yet Indian city. Yesterday, the volunteers participated in the language and culture program, where the Hindi classes were taught and the volunteers also went to a large and beautiful temple a few blocks away from their host family home. I have attached two pictures taken two weeks ago from when other volunteers recently went to Delhi on the same trip as those three who are on the way to Delhi right now. The final picture was taken at the temple where the volunteers visited yesterday.
Posted by Unknown at 9:10 AM No comments: 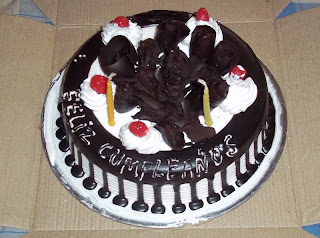 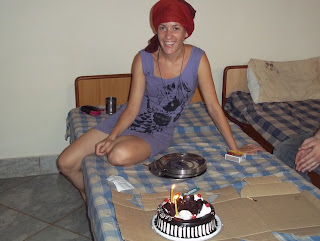 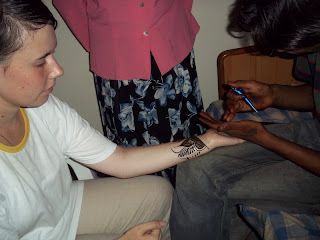 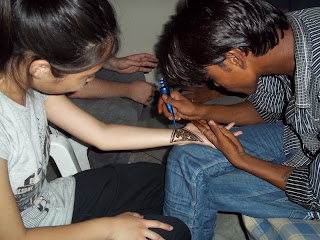 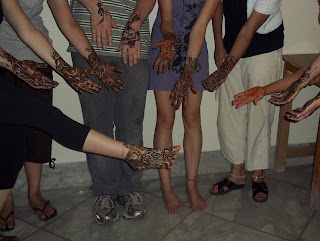 Today several volunteers returned from a trip to Nainital, in the northern regions of India! One volunteer from France and two from the US went together to enjoy the cooler air up in the mountains as they explored a new city. The volunteers described that it was nice to get away from the warmer weather in Delhi NCR, but they wanted to return a bit earlier so that they could continue their volunteering programs with the under privileged children. Meanwhile, two volunteers from England went to Jaipur for one or two nights, and had seen a bollywood film, Milenge Milenge, last night. Two other volunteers with Aim Abroad, both from Spain, went to Hareedwar, and are going to travel further north from Haridwar into Rishikesh and eventually to Dharamsala and Ladakh. Otherwise, the volunteering programs have been going very well. Many volunteers have been going to the school for children who are under privileged, while others have been visiting the school for disabled children. Some volunteers have even been participating in our language and culture program, where we teach about Indian culture as we teach Hindi, while also touring the local area as well as sightseeing in the metropolitan area in Delhi. This wee we will be continuing these language and culture classes as well with some new volunteers from Spain!
Last week, four other volunteers from London were with us at Aim Abroad as well, and we have some pictures from when they were all together in Delhi NCR: It was one of the Spanish volunteer's birthday, and we got her a cake and sang Happy Birthday to her in English, Spanish, and Hindi too! At the end of the evening, two mehndi wallahs (artists who put mehndi, or henna, on people) came and gave everyone unique and different designs! Here are the photos from that evening last week!
Posted by Unknown at 12:46 PM 1 comment: 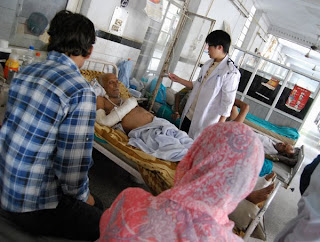 Today many volunteers split into several groups for their volunteering projects! In the morning, two volunteers from the US went to the Ultrasound Clinic where they saw several cases of kidney stones and stomach infections, and several healthy pregnancies as well. Three volunteers from England visited a local Charity Hospital in Delhi NCR where they saw many different patients with varied diseases from colds to relatively extinct diseases such as diphtheria! Two more volunteers, one from England and the other from the US, went to the pediatric hospital where they helped take measurements with the doctors and assisted the babies in the nursery. Additionally, three volunteers, from the US, volunteered at the street children school where they continued teaching the children English grammar. Finally, one volunteer from Spain and another from England visited a local girl's orphanage for the day where they helped the orphanage staff and spent most of the day interacting with the orphans. Now, the volunteers are back with the host families, and are ready for another exciting day of volunteering tomorrow. Several of the volunteers are leaving tonight and tomorrow morning to go back home, and the children and projects are sad to see them leave, but know that the volunteers will be back in India soon after having such a wonderful time with Aim Abroad and at the volunteering projects.
Posted by Unknown at 8:20 PM No comments: 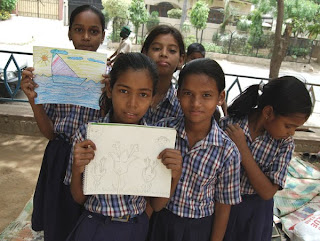 The volunteers with Aim Abroad went to the street children project today. At the first area of the school, there were about sixty children, instead of the regular 100-200 children that come in the winter. At the moment, it is sowing season in India, and many of the street children who have relatives in farms have probably gone to the farms to help with the work. Also, because of the heat (around 40˚C or 100˚F), many of the children stop coming to the project until the weather is more favorable. In any case, the volunteers practiced their new-learned Hindi with the students and teachers, and also taught important English grammar concepts to the children. Two of the volunteers, one from the US and one from Spain, also taught the children Red Light/Green Light, which the children loved. Although they described that there was a language barrier at first, they were able to communicate how to play the game to the children and they all played correctly! They did depict one funny image though! During the last game of Red Light/Green Light, two children touched the "street light" at the same time: To decide who would win, one volunteer figured they should play "Rock Paper Scissors" (or "Patthar, Paper, Kanchee"). Well, all of the children ended up learning a second game instead, and there was no time for the children to play Red Light/Green Light in the end! Other than the two volunteers who played games with the children and one volunteer who focused on teaching songs and English grammar to the children, another volunteer taught the children coloring and art, which the children really enjoyed as well. Look at some of their art!
Posted by Unknown at 11:35 PM 1 comment:

Yesterday the volunteers with Aim Abroad went to the Akshardham Temple in Delhi! A group of seven volunteers, four from England, one from Spain, and two from the United States went together to see the temple. They had breakfast early in the morning with the host family, and then headed out for the temple. Once they reached the temple, they walked throughout the entire complex, which really amazed them. They described visiting the temple as if visiting a building like the Taj Mahal a few years after it was constructed. Though the temple was not complete in its construction, the volunteers were truly inspired by visiting such a wonderful and spiritual place, where they were around other tourists, Indian and foreign alike! The volunteer from Spain mentioned that someone who worked at the gift shop even practiced some Spanish with her, as she was used to seeing so many tourists from Spain. After the volunteers finished visiting the temple, they enjoyed a delicious lunch at the temple and had some ice cream to quell the heat. AFter they left the temple, they returned to the host family home to prepare for the street children projects. Some volunteers have been learning some Hindi to practice with the children as well!
Posted by Unknown at 4:11 PM No comments: