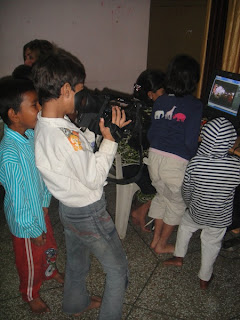 Hindi classes began yesterday for a group of five volunteers with us, visiting from Australia! Three of the girls are family, and they have been traveling together in Nepal; the other two girls, who are friends of the three family members, have also come together for traveling, but had stayed in India to visit Amritsar, to see the Golden Temple, and Dharamsala or McLeod Ganj, famous for one of its residents, the Dalai Lama. Yesterday, the volunteers focused on their Hindi classes with our Hindi teacher, as he taught about Indian culture and about some of the local languages and dialects. This teacher gave some information to the volunteers about the language spoken where I grew up, in rural Haryana also: This language, Haryanvi, is very similar to Hindi, but has a very harsh accent with a slightly different vocabulary. To give an example, in Hindi, when we say "Kya kar raha hai?" (What are you doing), in Haryanvi, we say "Kye kar reeya sai?" Though Haryanvi is a similar, yet distinct, language, the people in this region all speak Hindi, and almost anyone who grows up in Haryana can understand Hindi, because of its similarity to Haryanvi and its practicality as a spoken language. We find that many volunteers enjoy learning about the different cultures and people from different regions in India, and they particularly appreciate soaking up the details of our society here in Haryana and India. After the language classes finished, the volunteers ate some traditional Indian "samosas" (a pastry filled with spiced vegetables) with some "hari chutney" ("green sauce," or more specifically, coriander sauce/chutney), which everyone enjoyed. Afterwards, we introduced the volunteers to the cook at the orphanage where they have been staying, and he showed them how to make "roti" (or in English, we say "chapati"), which they enjoyed with "chaaval" (rice) and "daal" (lentils). We are looking forward to continuing their Hindi language classes and offer some sightseeing of the neighborhood in Delhi NCR! Also, we should have a very special blog post coming up, with a display of a video about our orphanage! One volunteer, from Barcelona, came, shot, and edited an entire documentary in just one week! When we finish reformatting the film, we will try to post it on the blog in the coming days! Here is a photo of Rajat, one of the children at the orphanage, holding the volunteer's camera at his home, as Rajat is shooting some of the video himself too!
http://www.aimabroad.org
Posted by Unknown at 10:55 AM